And so the Cheltenham Festival is over for another year. Racing's most spectacular event has ended with shocks, surprises, happiness and sadness.
Kauto Star's exit from the Gold Cup produced a rare sight: applause and respect filled the grounds when Ruby Walsh pulled the horse up with 13 more jumps to go.
For me, the 2012 Gold Cup made me realise how much I love the sport as well as how much it made me realise I want to be a horse racing journalist.
Unfortunately I had a briefing at work at 3:30pm yesterday and as it takes me 15 minutes to drive there, I had to leave home five minutes before race time.
'Damn', I thought. 'This year's Gold Cup is going to be magnificent but I was going to miss it.'
Thank goodness for radio though! I tuned into the race and was able to listen to the commentary. Pheww! I wouldn't have to know the result of the race after everyone else.
But I did something which I had never done before when listening to a race, or watching one for that matter. When Walsh pulled Kauto Star up, I cried.
I know what some of you may be thinking, 'Crying over a horse?! That's pretty extreme.'
But Kauto Star isn't just any horse - he's a champion. He's respected throughout the racing world: he's a superstar.
He has brought joy to the sport. Not only did we enjoy watching him race, but he loved racing. He doesn't want to be standing in a field chewing on grass all day long; he wants to be racing with Ruby and having crowds of spectators applauding him.
But then the race got to the crucial stage - it got so tense that I had to pull into the nearest car-park to listen to it.
I backed Midnight Chase as he is a Cheltenham horse, so I was at the edge of my seat when Dougie Costello was leading him round the course.
Goodness knows what people in the other cars thought: 'What is that girl doing waving her arms in the air and yelling at herself?'
A.P McCoy rode Synchronised to a glorious victory. No doubt about it. He niggled the horse throughout the race, giving him constant reminders and pushing him to first place.
He deserved the win but even though Long Run was heavily backed he failed to make an impact. Tony did a brilliant job.
But Kauto Star will always be remembered in the 2012 Gold Cup as a hero, not a disappointment. He has made non-horse racing fans enjoy racing. People know who Kauto Star is.
His name will go down in history along with the likes of Best Mate, Dawn Run and Red Rum. I think you will agree with me on this one because this sporting legend deserves it.
Posted by @abby_rugg at 12:08 No comments:

SELECTIONS FOR DAY 4 OF THE CHELTENHAM FESTIVAL - GOLD CUP DAY

SELECTIONS FOR DAY 3 OF THE CHELTENHAM FESTIVAL

SELECTIONS FOR DAY 2 OF THE CHELTENHAM FESTIVAL - WEDNESDAY

ROUND-UP OF DAY 1 AT CHELTENHAM

The Cheltenham Festival got off to a roaring start yesterday but finished with shocks and surprises.

Ruby Walsh did not have a great start yesterday: he rode champion horses yet failed to make an impact until late afternoon.

Hurricane Fly was perhaps the biggest disappointment of the day. Having set off at 4/6 Mullins' horse looked set to storm ahead of the group.

But he only finished third as Rock On Ruby, ridden by Noel Fehily, surprised punters as he finished in first place at 11/1.

Walsh knew he should have won that race and so did Mullins. It was great to see an outsider win the race and Fehily deserved the win. But I cannot help but feel a little disappointed towards Walsh and Hurricane Fly.

Al Ferof was another example of how yesterday was not Ruby's day. The grey finished fourth whilst Sprinter Sacre created a buzz for the crowd at Cheltenham.

Barry Geraghty rode the horse to a splendid victory but if Al Ferof had not made that mistake over the jump, he could have finished ahead of Henderson's horse.

However, Walsh redeemed himself by riding Quevega to victory.

She was perhaps the best horse of the day for me as she has performed perfectly.

Cinders and Ashes, at 10/1, got the Festival off to an encouraging start.

Day 2 has arrived and everyone can expect more show-stopping races. Place your bets and enjoy.
Posted by @abby_rugg at 09:19 No comments:

SELECTIONS FOR DAY 1 OF THE CHELTENHAM FESTIVAL - TUESDAY

CLIVE SMITH SAYS KAUTO STAR IS "NEARLY THERE" WITH HIS RECOVERY

Clive Smith has announced that Kauto Star is "nearly there" with his recovery from a fall during schooling.
Racing's most popular steeplechaser is still facing doubt about his entry in the Cheltenham Gold Cup but is looking much better since Paul Nicholls claimed he was 50/50 for the high-profile race.
The decision of the twelve-year-old's entry will not be made until Monday so that owner Smith and trainer Nicholls are able to assess to response to a racecourse gallop at Wincanton on Friday.
Kauto Star is a strong horse; he clearly enjoys racing so it is no wonder why he is Ruby Walsh's favourite.
He has a lot to prove though as I know that many punters are favouring Long Run, the younger horse.
But Walsh can hold his own on the steeplechaser. Even if Kauto Star is not 100 per cent, Walsh will be able to boost him to that. They make a great team and I wouldn't be surprised if they make more headlines together.
Posted by @abby_rugg at 17:19 No comments:

MIDNIGHT CHASE - DARK HORSE FOR THE GOLD CUP - MY OPINION

Midnight Chase could be a dark horse for this year's Cheltenham Gold Cup as recent performances have been highly successful. 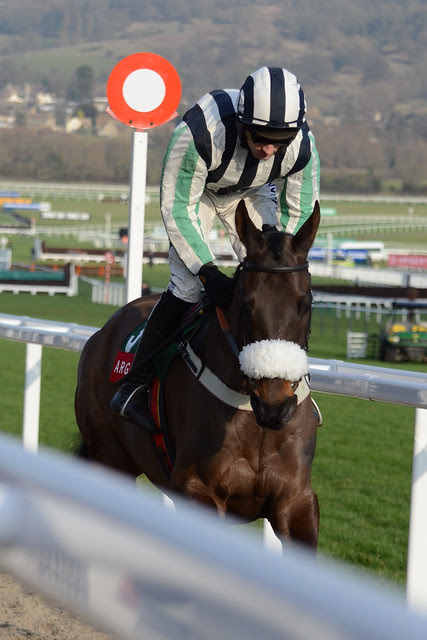 Photo taken from Flickr, Creative Commons, by Meteorshoweryn
The horse has produced some wonderful yet memorable
performances this season and I believe that Dougie Costello can ride him to victory in two weeks time.

Since Midnight Chase won the Argento Chase in January, a dress-rehearsal for the Gold Cup, his yard has kept relatively quiet about the horse's success.

I think that this could work well in their favour - keeping Midnight Chase out of the lime-light could be what they need to keep the horse's performances at a high standard.

The media has focused strongly on Kauto Star and Long Run - they are, without doubt fantastic horses - but since beating Tidal bay at Cheltenham last time, I think Midnight Chase could surprise punters and come out on top.

Costello knows how to handle the horse: they make the ultimate team. Midnight Chase jumps fluently and is capable of staying ahead.

He is definitely one to watch.

It's always great to see an outsider beat the favourite, but with regards to Midnight Chase, I think he can handle it.
Posted by @abby_rugg at 11:52 No comments:

Photo used from flickr, Creative Commons and taken by CharlesFred
What a week it has been for Paul Nicholls and his champion horse Kauto Star.

Racing fans and experts took to Twitter yesterday afternoon to express their fears and thoughts of whether the twelve-year-old will race in the Cheltenham Gold Cup in a few weeks time.

Kauto Star injured himself in a fall last week at his stables in Somerset.

The steeplechaser has become one of the most popular jumps horses in the country so it is no wonder that a lot of people have debated over the incident.

Nicholls told Sky Sports news: "You get a little older and take a little knock and it just takes a little bit to get over it."


"It's getting better each day, so we're still hopeful. We've still got a fortnight."

We will know for sure whether or not Nicholls will enter Kauto Star in the Gold Cup six days before the race (March 10) yet the trainer said his horse will do "his last strong piece of work" and will need to be convincing if he is to be allowed to take part."

But now it has been announced that Grands Crus may race if Kauto is not fit. Even though this may cause disappointment for all racing fans, Long Run versus Grands Crus will still be a fantastic race - even if it's not as thrilling to watch.

Punters and professionals want to see a twelve-year-old steeplechaser give another horse half its age a run for its money. We want to witness the old-dog take on new tricks.

Long Run is a fantastic horse, you don't need me to tell you that. But watching Henderson's horse take on Nicholls' supreme champion is what people are paying to see.
Posted by @abby_rugg at 12:10 No comments: